Within a Day’s Drive

on Route 66 for Global Tourists

Success in Kingman begins with a central location between Las Vegas, Phoenix and major Southern California markets and the more than 34 million potential consumers residing within a 350-mile radius. The ability to reach customers and the workforce is elevated in Kingman. 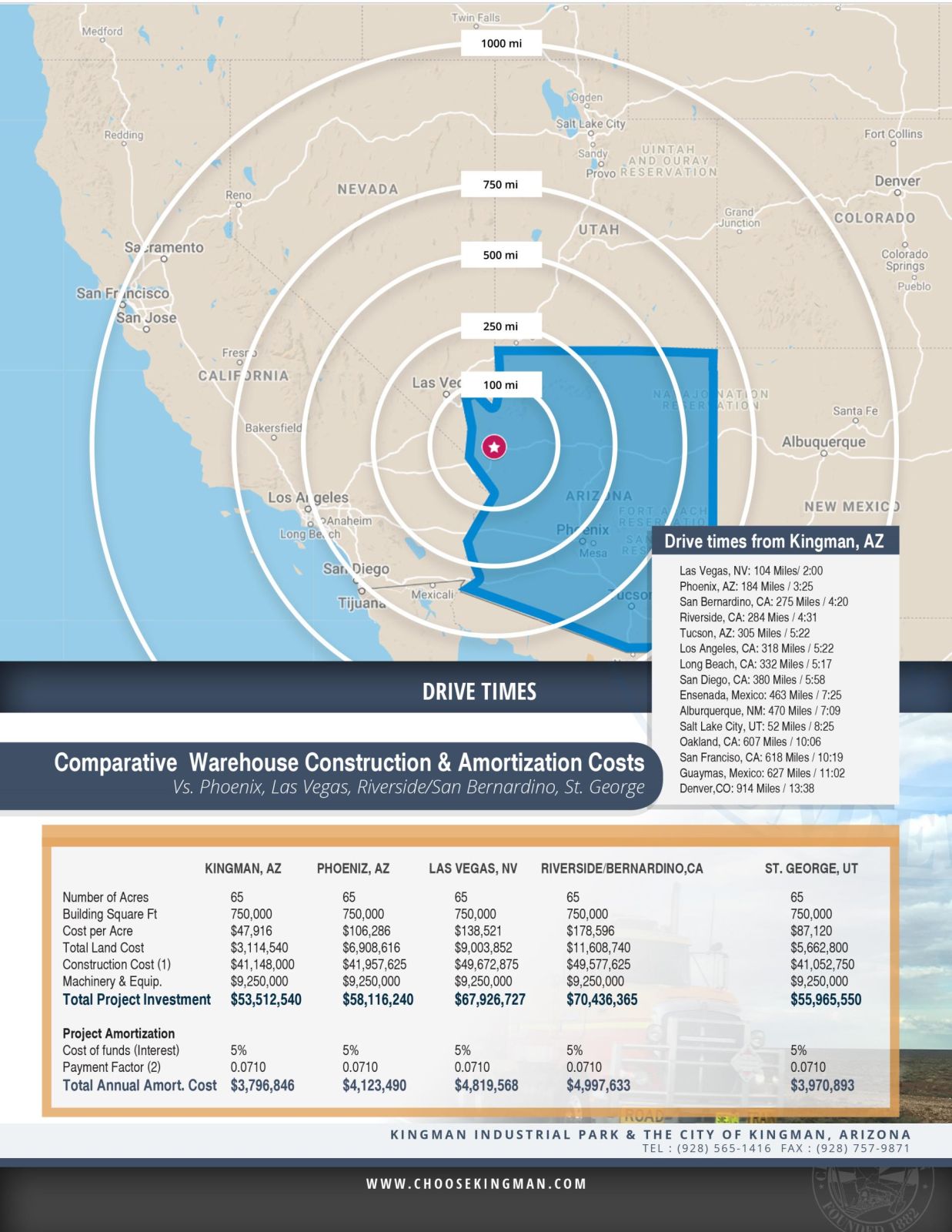 Accessing those potential consumers is fast and efficient, as the city lies at a crossroads of quality transportation. Commuters and ground transportation deliveries can easily reach Southern California cities, Phoenix or Las Vegas from Kingman on the same day. U.S. Interstate 40 is one of the nation’s primary east/west corridors, running through Kingman from Southern California to North Carolina. U.S. Highway 93 connects Kingman to Las Vegas and Phoenix and is part of the future designated Interstate 11 that will run from Canada to Mexico, offering significant promise for future development.

Rail transportation advantages include a main line of the Burlington Northern and Santa Fe railroad running through the city. The Kingman Terminal Railroad operates over three miles of track in the Kingman Airport & Industrial Park, which also has the presence of the Kingman Municipal Airport, with two active 6,900-foot runways.

A simple fact is businesses can operate in Kingman with a cost balance sheet much more affordable than elsewhere. One example is the cost of utilities in the Industrial Park and through the area leaves much more to a company's bottom line:

Location is only part of the story. Commercial sites and properties are abundant in Kingman and the surrounding area with either pre-existing infrastructure on-site or the ability to bring it to any size business quickly and efficiently. The Kingman Airport and Industrial Park is the largest industrial park in Northern Arizona, with 1,100 acres of developed land and an additional 1,500 acres planned for future expansion. The Park is home to more than 75 companies employing over 1,900 people.

Arizona was recently ranked as a Top Ten State for its workers due to an available, growing, and educated workforce. A person’s dedication to continuing their education to further existing abilities or develop a new skill base is critical to ongoing improvement. Kingman’s workforce has more than 80 associate degree and certificate options in 40 programs at Mohave Community College to continue their professional development.

Kingman is situated on historic Route 66, bringing a consistent tourist stream to the area. Venturing outside the city brings visitors to incredible outdoor amenities and their recreation. Grand Canyon National Park is 70 miles from Kingman. The desert surrounding Kingman provides hiking, biking and simply viewing the multi-hued stone formations and magnificent pine-covered Hualapai Mountains, in addition to the phenomenal stargazing offered by the lack of significant light pollution.

Add to Report
View Report How To